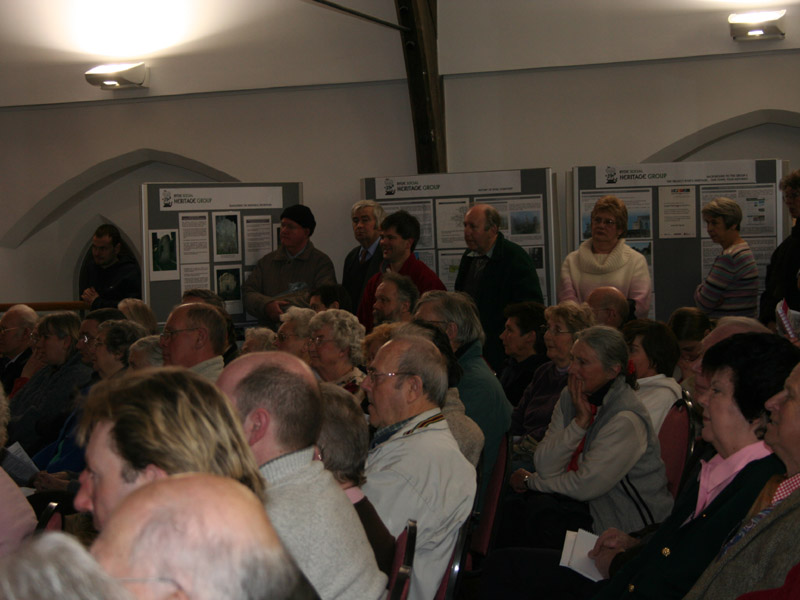 Following a successful bid to the Local Heritage Initiative, Ryde Social Heritage Group held an evening event at the George Street Centre, on 21 March 2006, to launch the Group’s project about the social history of Ryde, and the new website. Almost 150 people attended the occasion.

Preparations had taken place over the previous weeks to ensure enough of the research material had been written up – lots had been done over the past two years, but this first big exhibition become the impetus to type up more of the stories and make sure the photos were the best they could be.

Many of the members lent a hand, and discovered talents in layout and composition. We decided on a format for each page of the display, with the choice of font and size ensuring a consistent appearance – this layout will be used on all documents in the future, to become a recognised feature of the Group.

On the evening, members also helped setting up the rooms, greeting guests, taking membership applications, and generally helping the evening to go well. The prepartions were worthwhile as everything went smoothly.

Following a brief welcome address by Sally-Ann Garrett, Chairperson of the Ryde Social Heritage Group, the programme for the evening consisted of three distinct sections:

* A presentation by local historian, and newly named Honorary President of the Ryde Social Heritage Group, Roy Brinton, who gave a talk which identified some significant citizens of early Ryde, and described a selection of noteworthy houses of the town
* A countdown of slides and music by Matthew Bell, Treasurer of the Group, to launch the new website, produced by Matrix e-Business
* An exhibition of some of the stories, inscriptions and photographs of the 700 graves researched so far.

Roy Brinton talking about past citizens of Ryde
Roy listed a only few names, but each had an interesing story, amongst them Fowles a famous painter; Sweetman, a brewer; Vanner, a stagecoach operator; Nutt-Broderick, a photographer; Brigstocke, a land owner; and Dimmick, a Nurseryman; as well as Butler, Duffet, Carter, Colenutt, Welby, and Langdon. He mentioned the Selina Lifeboat Disaster of 1907, and talked about the inhabitants of houses such as Gwydwr House on Binstead Road, and St Wilfred’s in Haylands; he highlighted Westmont House which is now Ryde School; Westfield House, which had a gallery designed by Thomas Hellyer, who lived in Melville Street, and Ryde Castle, now a hotel. His talk was illustrated by slides from his vast collection of photographs.

Following the countdown, Matthew provided a hands on opportunity for people to explore all that the new website has to offer. Matrix e-Business followed the group’s specification to the utmost, and the results speak for themselves. The site is functional, and easy to navigate.

The exhibition was well received and prompted a few people to offer details of their own to add to the histories about the graves and memorials. The website has information about the history of the cemetery and the history of Ryde, the natural history of the cemetery site, galleries of photographs of people, nature, the graves and of Ryde, and links to other cemetery groups. There is a page that provides a way to contact the Group; relevant questions (and answers) posted here will be entered in the moderated guestbook.

Since the launch of the website, interest has been shown worldwide; people have read the stories and then offered photographs and more information, adding further content to the database.

People who attended the event found a pack of information on their chairs, including a membership form, a newsletter, the programme for the evening, and an evaluation form. Four members of the Group circulated during the breaks to talk to the audience and made a note of any comments or questions.

The completed evaluation forms gave the Group a good idea of who the audience was, which will help us to plan future events. The form contained a series of questions. We wanted to know how people found out about the exhibition (local press, radio, etc), what their area of interest was, if they were part of a school or youth organisation that might participate in the future, and whether they attended the event for their own benefit, or to represent a group. We also asked them to rate each of the evening events out of 10. The results were pleasing, with our guest speaker achieving more points than the exhibition or the launch, but these scored equally high. Of the 32 people who completed the section about the publicity for the event, 16 learned of the event from the County Press and 14 from the Beacon, whereas only one noted they heard about it on the local radio, and only one had seen a poster. 19 people said they were interested in family history, 18 in social history, 22 in local history and eight were interested in natural history. Five people were representing children and three were representing a group. Three people volunteered to provide information or a story.

Eighteen new members have joined the group as a result of attending the meeting, and more than £130 was raised from donations.

All in all, the evening was a great success, and well worth the effort involved in putting it all together. We were extremely pleased at the public response to our launch and the many offers of help. Many members of the Group were involved on the evening, from those who manned the door, to those who set up the display, as well as those who made refreshments, and put away the chairs at the end of the evening. The Group would like to extend a big “thank-you” to all who participated.

The County Press later noted a comment from Sally-Ann, Chairperson of the Ryde Social Heritage Group: “We need more volunteers. The Project is a huge job, and we plan to extend to schools. The more young people know of the history and the real lives portrayed by the headstones, they are bound to have more interest in, and more respect for the cemetery. We aim to tap into the very valuable living history before that too is lost, by interviewing older people of Ryde who have many stories to tell of their own families and of their own experiences in Ryde.”