The Ashey Cemetery land was purchased by the old Isle of Wight Rural District Council from Ashey Manor Estate in 1910.

Isle of Wight Observer 9 July 1910
Mr William Beere, of Colenutts Road, Haylands, was appointed caretaker and grave digger of the new burial ground at Upton. It was also decided to place a turnstile gate at the side of the ground, giving access at all times from the bridle road at the lower side. “A wheel bier has been provided, which will be at the disposal of the parishioners on payment of a reasonable fee, for use outside the cemetery. Tools have been obtained and the ground will be ready for interments as soon as the Home Secretary gives his approval and a part is consecrated by the Bishop.”

Isle of Wight Observer 8 October 1910
At a meeting of the Ashey Parish Council at the Congregational Schoolroom, Haylands in October 1910, “Dissatisfaction having been expressed by several members as to the state of the burial ground owing to the failure of the caretaker to carry out his duties according to agreement”, full consideration was given to the matter and they decided to terminate the contract with Mr Beere after only three months and appoint Mr J Dimmick in his place.

Isle of Wight Observer 21 January 1911
It was reported that owing to the severe frost and subsequent thaw, the wall on the north side of the burial ground had been seriously affected, and the top had gone over so much that it became necessary to have it strutted up at once.

Isle of Wight Observer 30 March 1912
The annual parish meeting was held at the Congregations Schoolroom on Tuesday evening when Mr J H Grimes presided. “The wall of the burial ground has been rebuilt by Mr J J Barton, with no expense to the Parish, and the arrangements made for interments etc., seem to be working satisfactory.”

Ashey Cemetery was absorbed by Ryde Borough Council in 1933 under the Isle of Wight Union Act. It has some conservation land and is in a very pleasant situation with lovely views.

The War Memorial is a simple wooden cross, on a two stage stone base, with a bronze plaque. The oaktimber came from the Oglander estate. It was originally installed in St Matthews Church in Ashey and dedicated on 2 May 1921 by the Vicar of Ryde (the Rev Hugh le Fleming) assisted by the Vicar of Brading (the Rev C W Hampden Weekes) and the Rev D E Hunter.

The cross was replaced in 2012 with new timber and bronze plaque. 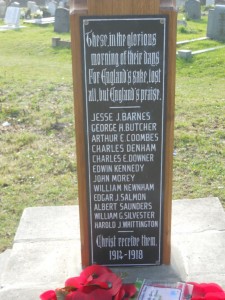 The foundation stone of St Matthew’s Church, situated near the junction of Ashey Road and Green Lane, was laid by Lady Oglander in 1878. It was a mission church to, and served by, the clergy of All Saints Church, Ryde. In 1899 Langdons, builders of Ryde, constructed a Sunday school room next to the church at a cost of £50. The church was used on a regular basis until the 1950s when it was deconsecrated and it became a private dwelling in the 1970′s. The War Memorial was relocated to Ashey Cemetery at about that time.

The adjoining Congregational Chapel was sold to Ryde Borough Council for road widening in the 1920s.