Many birds are seen overhead, as well as resting and feeding on the various plants and nesting in the trees and shrubs. The berries, insects and caterpillars provide an attractive food source for many species and their young.

On spring and summer evenings it is a delight to walk in the cemetery and listen to the bird song. Although it is close to the centre of town it is far enough away from roads and traffic for the bird song to be enjoyed.

In the spring when the sun rises early in the morning, the birds respond to the first light with the ‘dawn chorus’ all joining together in song to welcome the new day. The dawn chorus occurs because as winter retreats, male songbirds sing to attract potential females, protect their territory and to warn off other males. As soon as it is light enough to look for food, the dawn chorus comes to a close which is why you have to be an ‘early bird’ to hear it. We regularly see the green woodpecker swooping over the graves and there are many blackbirds, tits, crows, robins, sparrows and greenfinches.  We have also spotted jays, sparrow hawks, goldfinches and magpies.

In January we take part in the RSPB Birdwatch. 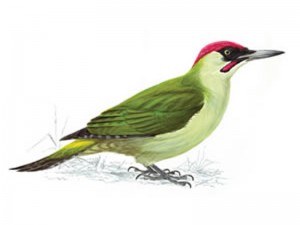