Ryde Cemetery contains more than 20,000 graves and vaults.  Many are the last resting place of well-known Ryde families from the 19th century to the present time.

The cemetery gates, the Lodge, the central driveway and the two chapels with the covered porch and bell tower

The prosperity of many of the local trades-people and businessmen can be seen from the considerable number of imposing and elaborate stone memorials that exist.  Some of the wealthiest families purchased sufficient space for the construction of vaults where several members of the family could be buried together.

Also in this part of the Cemetery is an obelisk to the memory of Thomas Dashwood, a timber merchant and master builder.  There are many monuments existing to his skill as a builder. He built Brigstocke Terrace, the Market House and Town Hall, St Thomas’ and Holy Trinity Churches.  He was one of the wealthiest men in the town when he died in 1861. 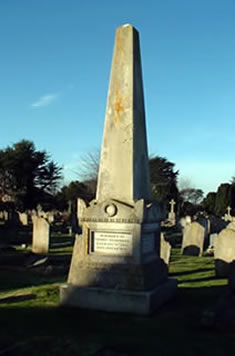 The Old Parish Cemetery soon began to fill up and by the late 1850s it became clear that more land was requried.  An extension was made to the north and west in 1860/1862.  The central driveway was installed at this time, the two central chapels and the Cemetery Lodge were also built around that time.

This extension is now known as The Old Cemetery.

1866 Petition by ratepayers of Ryde, not to level unattended graves

The picture above shows the central driveway with the wide borders of shrubs and flowers and the two central chapels with the covered porch and bell tower.  The small sign in the bottom right hand corner of the picture says:

An article in the IW Times on 5 February 1863 describes the cemetery:

This “heaven canopied chamber of the dead,” has been taken possession of by the representatives of all those classes into which the Christian world, even after the great leveller death has done his work upon them, remains divided.  The consecrated portion of the ground has already had many sleepers of the long sleep, laid beneath its sods.  On Monday last that part of the inclosure set apart for the use of our Romish fellow Christians, was inaugurated by the interment of the “oldest inhabitant,” and on Tuesday, the non-conformist body took possession of their allotted part, by placing within the earth’s peaceful bosom an infant of a few years old.  The contrast between ninety-seven and three years was wide indeed, and yet, when compared with the duration of that future world into which mysterious region each has entered, the ninety years, seem but “as a watch in the night.”  These cheery planted cemeteries which have superseded the gloomy church yards of the past, are beautifully indicative of a happy future.  A Christian cemetery may with truth be called “a garden of hope.”

A further extension to the west in 1881/1882 took the boundary of the Cemetery to Pellhurst Road  it has not been extended further since that date and it is now full except for a very few spaces.

This extension is now known as The New Cemetery.

Article from Isle of Wight Observer February 1882 re Cemetery Fees