Buildings and Walls of Ryde Cemetery

The main entrance gateway, lodge and central chapels are all built in a similar style and employ similar materials, whereas the earlier Chapel of St Paul, built in about 1842, is of a different construction and style.

This early chapel is situated on the eastern boundary of the site to the south of the later entrance gateway. The east door of the chapel opens directly onto West Street and is set within a two centred arch of Early English style with dog tooth decoration. Above the door is a double lancet window with quatrefoil tracery. The building is  constructed of roughly shaped stone with corner buttresses to the West Street facade and has a slate roof.

The entrance gateway is constructed in the polychrome brick that was fashionable in the High Victorian period. Here, the yellow brick used for the main body of the structure contrasts rather harshly with the two shades of red brick used for the arches and for horizontal banding. To the north of the main archway for wheeled traffic is a smaller arch for pedestrians. Both arches have gabled roofs, the main arch being surmounted by a cross.

At right angles to the entrance arch and immediately north of it is the lodge, now in private ownership. This building is of stone with brick quoins and window dressings and a slate roof. A two storey central projection with gabled roof has three arched entrances at ground level, forming a porch. The lintels over the porch and windows are of the same red brick as that used in the entrance gateway and the central chapels.

The two central chapels are linked by a slate roofed porch with decorative wooden gables through which the main drive passes. It is not known when the original belfry was been taken down, although old postcards have been found showing this structure. A turning circle surrounds the chapels. These two buildings are of identical construction, being of stone with yellow brick quoins and lower window dressings and with horizontal bands of red brick. The eastern facade of each chapel contains a triple lancet window with arches of banded red brick. There is an additional single light in each gable, arched in red-banded brick. 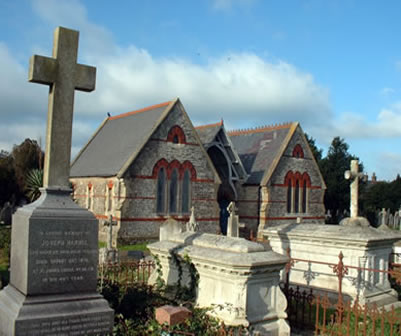 To the west of the twin chapels and immediately north of the central path is a small building which is first shown on the 1896 map and lies at the eastern end of the cemetery extension made in 1881. The building may have been built as a tool store, although it is also referred to as the soil store, or the Gardener’s shed. It is a T shaped structure of stone with yellow brick dressings and tiled gabled roofs with finials. An arched doorway faces south into the cemetery.  It is known as The Bothey.

At the western end of the cemetery there is an entrance from Pellhurst Road. At this entrance are two stone and brick gate piers. The entrance had been blocked with wire mesh and barbed wire since 1993 in an effort to curb vandalism but was restored in 2010 as part of the Ryde Cemetery Restoration Project.