William Knyvett was an eminent singer and composer, a Gentleman of the Chapels Royal and lay vicar of Westminster Abbey. He was born in London on April 21st 1779, the youngest son of Charles Knyvett. He was initiated in music by his father and then trained by Samuel Webbe, a well known ‘Glee’ composer. He completed his education studying the works of Haydn, Mozart and others of the then ‘modern school’ under Signor Cimador a Venetian who was living in London and was well known for his skill and refined taste.

In 1797 at an unusually young age William Knyvett was chosen as one of the Gentlemen of the Chapels Royal, and in 1808 was appointed Composer to that establishment. Not long after that he entered the choir of Westminster Abbey as a Lay Clerk. His musical career lasted more than thirty years. He first commenced orchestral singing at the Concert of Ancient Music in about 1795, after which he assisted in all the most important concerts and music meetings in London and the provincial towns and eventually became principal singer. He was famed as a counter tenor and admired for the sweetness of his voice and the high finish and delicacy of his style in part-singing. He was considered to be among the very best of English singers particularly for his correctness in the musical enunciations of the words. His Glees were described as “airy and elegant”.

He also wrote ‘When the fair rose,’ a glee for which he gained a prize at the Harmonic Society in 1800, presented to him by his steady patron, the Prince of Wales.

When he died he left several unpublished compositions including “The King shall rejoice,” produced officially for the coronation of George IV, and “This is the day which the Lord has made,” written for the coronation of Queen Victoria. These became popular songs at provincial music meetings. 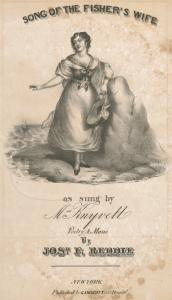 He was a popular man among his many friends and acquaintances, his sense of humour and wit made him a very agreeable companion. He was married twice: first to Sarah Delaney by whom he had a large family; then in 1826 he married Miss Deborah Travis of Shaw, near Oldham. She was also a singer and was renowned for her knowledge of Handel’s music. She sang at the Concerts of Ancient Music in 1813 and at the principal London concerts from 1815 to 1843. William had no children by this second marriage.

William Knyvett made several unsuccessful financial speculations and lost almost everything he had acquired in his career. He died at his home Clarges House, Nelson Street in Ryde on 17th November 1856 leaving barely enough money for his wife to live on. She died on 10th February 1876.

William Knyvett is buried in an unimposing grave in Ryde Cemetery.