Diana and I braved the elements on the evening of Tuesday 12 August to update the nature Diary for August.  It had been raining and blowing a near gale all day but luckily for us the evening did at least keep dry.

There was not much new to report this month but besides the wild flowers already reported in earlier months we did find:-

Knapweed (image below), Ragwort, Yarrow, White Clover, Great Willowherb and a ground hugging purple flower,  that with research I think is called Selfheal.

Diana came across a clump of toadstools, mushrooms and the remains of a large puffball (image below).

Also a broken eggshell which we believed was a Pigeon egg (image below), probably taken by a Magpie.

There were feathers strewn around in one part showing that a bird of prey had made a kill.

We also came across a large black slug!

The Elder bushes have their berries but they are not yet ripe, the bramble bushes are covered with blackberries many very ripe. 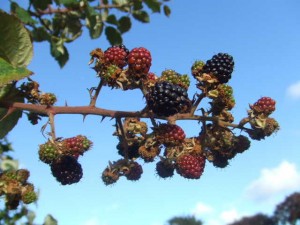 I also noticed that the Hedge bindweed now has berries but again they are still green.  The Wood nightshade had a few ripe berries and we a took a photo.

We were rather worried looking at the Oak-trees because the leaves have some sort of mildew on them and we noticed that several of the acorns are distorted and a strange shape.

The list of plants and insects we find in the cemetery is ever increasing and if, when you visit the cemetery, you should notice anything that would be of interest, please let us know by making contact through the Contact Us page of the website.