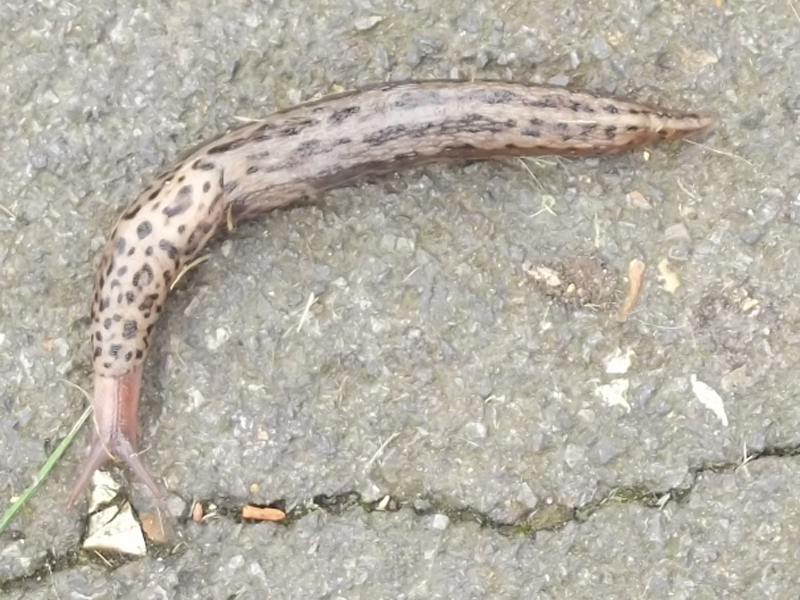 This summer has been perfect weather for slugs and snails, many of which live in the cemetery. Most of them seem to have migrated to the garden of The Lodge and have descimated our vegetable crops!

We had two beautiful shiney purple aubergines growing in the greenhouse and were eagerly waiting for them to grow big enough to eat. When we finally picked them we discovered a large slug had burrowed its way into the back of both of them and eaten nearly all the ‘meat’ inside. It was so comfortable it actually set up home in one of the aubergines. Sad to say that once discovered the creature didn’t live much longer and the aubergines were inedible!

According to the British Horticultural Society (BHS) numbers of slugs and snails were up by 50 per cent on normal this summer. We saw many different sizes and varieties this summer but never saw anything like David (Earle) discovered in the cemetery last week.

Limax maximus, also known as the Leopard Slug, is thought to be quite widespread in the UK. Its features are that it can grow up to 16cm long when fully grown; is brown or grey, with brown or black spots/blotches; the front of body has marbled pattern of spots (never stripes); the back of body has up to three dark stripes on each side which may be broken up into a line of dots, the underneath (sole) is white and their slime is particularly sticky!

It is found all year round across the UK, in woodlands, hedgerows, parks, gardens and cemeteries that have old trees or dead wood lying on the ground.

Leopard Slugs eat fungi, rotting plants and even other slugs. They need to keep their bodies damp in order to breathe, so are usually found in dark, damp places, particularly amongst rotting logs.

Unlike the most of the slugs that live in the garden of The Lodge Leopard Slugs are a gardener’s friend. They don’t damage healthy, living plants, but they do eat other slugs, including those that can damage garden plants and vegetables. By eating dead and rotting plants, as well as fungi, Leopard Slugs recycle nutrients and fertilise the soil.

The Leopard Slug is one of six minibeasts included in the Natural History Museum’s OPAL (Open Air Laboratories) Bugs Count survey launched in June 2011. David reported his find to them.