The Dangers of Stamp Licking!

A journalist for the Isle of Wight Observer in 1910 would have been gratified to know that today we can purchase postage stamps that are self adhesive. See the article below:

A Bath physician has revived the agitation against what he calls the dangerous habit of licking postage stamps. The bacteriologists tell us that the gum swarms with microbes, but then so does everything else, and those who use their finger, first putting it in their mouth, and then moistening the stamp with it, probably run as much risk as those who lick the stamp with the tongue, for which purpose it is so admirably adapted and handy.

But there is now in operation in a central London post-office a penny-in-the-slot machine, by which the handling of the stamps is avoided. You put in a penny, insert the corner of the envelope, press a lever, and withdraw the letter with the stamp affixed. If this mechanical invention proves a success, it seems likely to be generally adopted by the Post Office authorities.

Their press was already advocating the stamp licking machine. 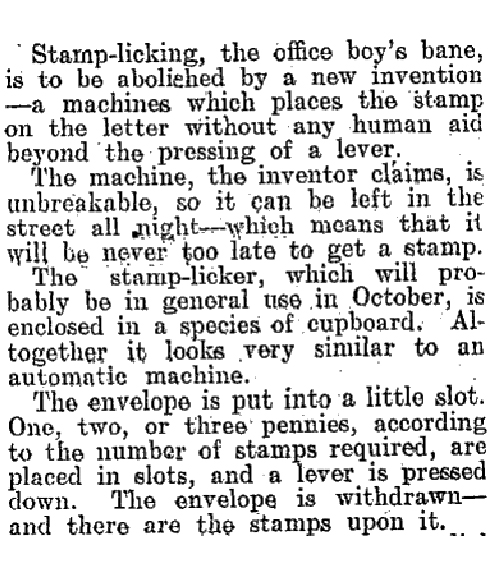