DO YOU FEEL HAPPY?

In March 1915 the local press was advertising to encourage recruitment to the forces. After the initial flood of enlistment at the onset of the war and when it certainly wasn’t ‘all over by Christmas’ many men became reluctant to rush to the cause. People were all too aware of the thousands who had gone off to fight, had not returned and yet the government was trying to play down the casualties and was still calling for more and more recruits. Horrific news did find its way from the Front and dreadful injuries in overcrowded hospitals viewed at home only added to people’s anxieties. Family after family, in street after street, received word of their loved ones killed, wounded, taken prisoner or missing.

One advert in the Isle of Wight Observer asked.-

DO YOU FEEL HAPPY?
Do you feel happy as you walk along the streets and see other men wearing the King’s uniform?
If not, why don’t you enlist today and do your share? 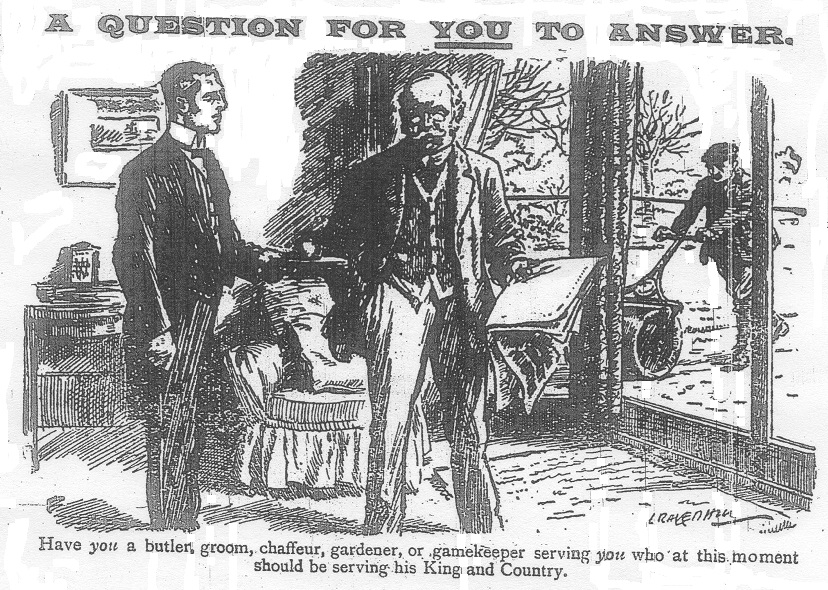 A QUESTION FOR YOU TO ANSWER.
Have you a butler. groom, chauffeur, gardener, or gamekeeper serving you who at this moment should be serving his King and Country?’

By 1916 military conscription had to be introduced.

William Edward Whittington lived in Weeks Rd with his young wife Ethel Lydia. He worked as a gardener for Colonel Cradock at The Lawn, Spencer Road.

We regret to report the death of a young and highly respected townsman, Private William Edward Whittington, 16th Hants Regiment, who, until a few weeks ago worked for Colonel CRADOCK, as gardener. At his country’s call he joined up, but owing to ill-health he was sent to Tidworth Hospital, Wilts., and died on April 1st. His body was brought back and buried at Ryde Cemetery, a service being first held at the Parish Church, conducted by the Vicar, a large number of relatives and friends, including representatives of the R. Victoria Lodge of Good Templars, of which he was an officer. Among the many choice wreaths were the following: – from “His Broken Hearted Wife,” “Dad, Mam and Mary,” “Uncle and Auntie,” “Uncle, Aunt and Family,” “Jennie and Children,” “Alice, Fred and Percy,” “Jennie, Ted and Children,” “Gran, Elsie and Ena,” “Colonel and Mrs. Cradock,” “The Staff at The Lawn,” “Officers and Members of Ryde Victoria Lodge of Good Templars,” “Girlie Budd,” “Miss Hayward,” &c.