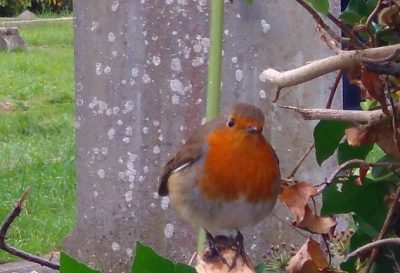 The Robin with it’s distinctive bright red breast, adds to the spectacle of winter and we tend to notice them more in our gardens at this time of year. It is usually a favourite on many greetings cards and illustrations, often depicted in snowy scenes, not that we wish for snow! It even plays its part in television advertisements.

The Robin pictured here was seen hopping around close by the transcribers this week (early December) when they were working in Ryde Cemetery and it didn’t appear to be at all concerned by their presence.

The Royal Society for the Protection of Birds

According to the RSPB the Robin is the UK’s favourite bird – it is familiar throughout the year and especially at Christmas! Males and females look identical, and young birds have no red breast and are spotted with golden brown. Robins sing nearly all year round and despite their cute appearance, they are aggressively territorial and are quick to drive away intruders. They will sing at night next to street lights.