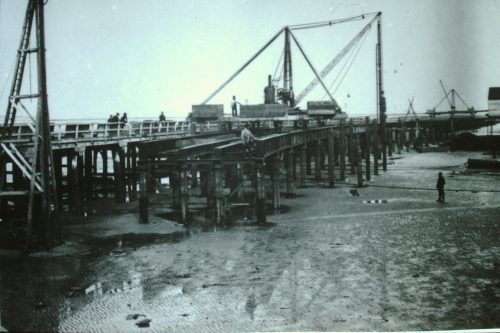 Building of the new Railway Pier

This photograph was taken in 1878 showing the railway pier being built near the Ryde Esplanade Station.

The railway pier tunnel, and line to St. Johns Road Station were built by the L.S.W & L.B.S.C. Joint Railways and was opened on July 12th 1880.  Below is a brief excerpt of the new pier opening from the Isle of Wight Observer 17 July 1880.

Through Communication at Last
On Monday last the trains commenced running to the end of the New Railway Pier for the first time.  This means the virtual completion of a gigantic work, executed at enormous expense and by the exercise of no little engineering skill.  The new pier is a most substantially built structure and a great credit to the constructors Messrs. Cochrane, who are, we believe, connected with the Horsley Iron Works Company, Tipton, Stafford. This pier runs side by side with the old pier two-thirds of the way, and then diverges to the eastward to the station, for the construction of which the size of the pier head has been about doubled.  There are a few minor works to be carried out, but in all its essential points the scheme may be said to be completed.  The stations at the end of the pier and at the pier gates are commodious and convenient, and at the latter the two sides of the platform are joined by a subway, an arrangement which might be adopted by other stations on the line.  The view from the carriages as they come up the pier is calculated to give visitors a good impression of Ryde.  As far as its management is concerned the new lines will be amalgamated with the Isle of Wight Railway under Mr. Joseph Bourne.

More about Mr. A. T. Cooke, a civil engineer on the project, here.