It was built in 1870/71 for William Edgar Ratcliffe on a field which had been part of Stonepitts farm land.  The house was originally named Ellington.  Ratcliffe was a very successful local solicitor and did work for the Lords of the Manor.  In 1879 Mr. Ratcliffe decided to move to Corstorphine, Spencer-road, so he disposed of Ellington to William Player Benett Brigstocke, who was joint Lord of the Manor with his brother George. 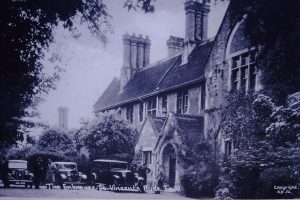 William was born in 1838, he was a barrister of the Inner Temple and married Elizabeth Whittleton in 1876, but they had no children. This gentleman changed the house name from Ellington to St. Vincents. Some five years after taking over the property, William Brigstocke died after a spell of ill health in November 1884.  His funeral report stated that “the cortege left his residence St. Vincents, and slowly made its way along Queen’s-road to St. Thomas’s Church.”  Soon after, his widow removed to number 10 Brigstocke Terrace, Ryde.

In 1885 the property was leased to Major-General James Langford-Pearse, who renamed the house Lindsay.  The General had fought in the Burmese war in 1852 and retired on full pay in 1879.  After his death in 1892, his widow and daughter remained at the house about another year.

The house appears to have stayed empty for a few years and then in 1898 it was taken by Mr. Rowland Corrie, J.P. and his family.  Mr. Corrie changed the name back to St. Vincents.  The Corrie’s stayed in residence till 1904.

The property then seemed to be unoccupied for some time, but used occasionally by the Brigstocke family, as in the mid 1920’s when George Robert Brigstocke moved in for a couple of years.

Mr. E. Wellesley is listed as living there in 1931, and by 1937 it had become a guest house managed by D. and E. MacDonald.  A year later it became St. Vincents Private Hotel.

During the 2nd World War it was said to be occupied by troops.  At the end of the war, George Robert Brigstocke offered St. Vincents to the local hospital to be used as a Convalescent Home in memory of his two sons who had died during the 2nd World War. This offer was accepted but as it was never used, by agreement, it was handed back to Mr. Brigstocke in 1947.

In 1949, the house was presented to the Forces Help Society & Lord Roberts Workshops to be used as a Forces Convalescent Home in memory of George Brigstocke’s two sons.  By 1950 the house was repaired and equipped to receive 25 men as convalescents. The house opened in February 1951 and by early summer 21 patients had arrived.