Fire at the Times Printing Premises 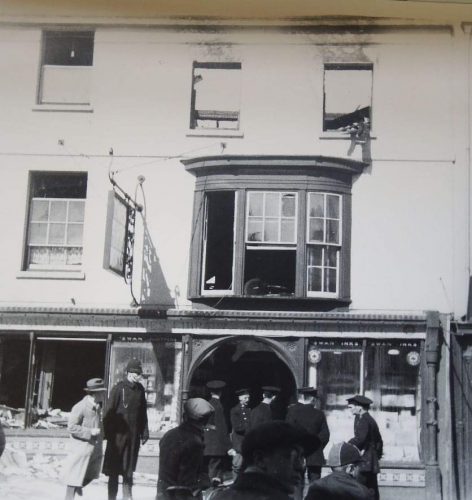 On 18th April 1936, a most serious fire occurred at the Isle of Wight Times newspaper and stationary premises, 72 Union Street, Ryde.  The majority of the building was destroyed.  At one time the flames threatened adjoining property, but the outbreak was controlled by the great efforts of two fire brigades.

The fire which originated in the machine room, was discovered by a visitor staying at the Royal Squadron Hotel, who detected a smell of burning at 1 o’clock on Saturday morning.  He reported it to the management and the police were informed, who upon investigating summoned the Fire Brigade.  They were soon on the spot under the charge of Chief Officer H. Jolliffe.  Inspector H. Rogers was also in attendance.  Mr. J. H. Lightbown, proprietor, his wife and two sons, escaped into the street partially dressed.

The brigade concentrated their efforts where the blaze started nearest to Church Lane, but it soon became apparent as the flames took greater hold of the machine room, in which there was a lot of inflammable material, that there was an immediate danger to adjacent property.  The firemen changed their operations to Union Street.  Hoses were taken into the Royal Squadron Hotel and jets of water were played onto the burning building from the roof of the hotel.  The flames continued to take over the building.  The local press reported that “although the firemen worked with tremendous energy, the outbreak continued with unabated vigor and it was thought wise to summon the Newport fire brigade.”  They quickly united their efforts with those of the local firemen, but when the roof of the building fell in, it was apparent that the Times building was doomed.

Efforts were then concentrated on preventing the fire spreading to adjacent property. Miss Bevis who lived in the top flat of number 71 left safely and preparations were made to remove furniture and books from the Pearl Assurance office in the premises below Miss Bevis’s flat.  A £500 collection of butterflies belonging to Miss Bevis were carried to safety, also books, the property of Mr. Lightbown.  The guests and staff of the Royal Squadron Hotel waited up several hours, prepared to clear the contents of the building if needed.

The printing machines and a guillotine were badly damaged and reams of paper and books were destroyed.  However, considering the fierceness of the fire, the front of the shop was not badly damaged.

Before the flames had gained a great hold Mr. Dennis Lightbown, the proprietor’s son, went up a ladder to rescue their cat, but it had obviously made its escape as it could not be found.

There were only two casualties of the fire, Miss Bevis tripped over a hose while removing goods from her flat and gashed her leg which needed six stitches. The other was fireman Langdon, who tore his hand badly on a nail and had it stitched at the County Hospital.

At 8 a.m. the Newport brigade left, after rendering splendid service. However, it was not until 10 a.m. that the local men left the premises.  Through their tremendous efforts, far greater damage had been averted, should the flames have engulfed the properties either side of number 72.